Understanding Action Potentials for the Introductory to Intermediate Levels

Anyone who wishes to interpret ECGs at an advanced level must know some of the physiology and anatomy of the heart. This helps us to understand WHY we see what we see on the ECG and often to anticipate what might develop. In this paper, I am going to discuss the most basic physiology of the heart – cellular depolarization and repolarization. I call this “Action Potential 101” because I will be discussing only the most basic concepts regarding action potentials.

When I was in medical school we had to study action potentials in neurology and cardiology. The profs mostly gave a very superficial discussion (sodium in – potassium out) which added very little to my knowledge. Later I realized what a deficit this was in my education as my interest in ECG interpretation began to grow.

My goal is to present the events of the action potential in a simple, straight-forward manner and to help you relate those events to problems encountered, not just on the 12-lead ECG but with the heart in general.

A myocyte is activated by being depolarized and then it must be repolarized before the next activation. Let’s get a better understanding of DEpolarization and REpolarization by focusing on the root of the word – polarization. Polarization implies a significant disparity between two forces or concepts – usually with opposite orientation: black/white, up/down, positive/negative, wet/dry etc. So, the fact that a cell can be DEpolarized means it has to already be POLARIZED. When we say that a cell is polarized, we are speaking in terms of positive electrical charge and negative electrical charge. A polarized cell is negatively charged on the INSIDE with positively charged forces on the OUTSIDE. The main concept here is that there is a DIFFERENCE between the charge INSIDE the cell and the charge OUTSIDE the cell. Again, in its NORMAL, RESTING state, the inside of the cell is negative and the outside is positive. The difference between the interior and exterior charges (at the cellular level) is measured in millivolts (mV). It’s this difference in charges that allows the heart to contract. But at the same time, there are other forces trying to reduce and/or eliminate the difference in those charges! Staying alive is dependent on our bodies maintaining that difference. When it can no longer do that… we die. 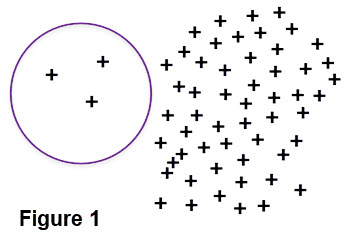 In Figure 1, we see a cell that is almost completely polarized. The interior is relatively negative compared to the very positive exterior. Now, if the cell becomes DEpolarized, that means there is less, or perhaps even no, difference between the charge inside the cell and the charge outside the cell. The difference (if DEpolarization is complete) will be 0 mV (see Figure 2). We refer to this difference in charge between the inside and outside of the cell as the membrane potential difference. In discussion, we shorten this term to membrane potential, which is unfortunate because it often causes us to forget that what we are really interested in is not a specific charge but the difference in charge between inside and outside.

Depolarization is followed by repolarization. Once the cell has been depolarized and the charge inside the cell is equal (or nearly equal) to 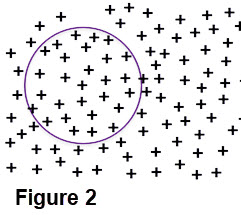 the outside, it must become polarized once again, i.e., REpolarized. After repolarization is complete, there is a short period of time – electrical diastole – during which nothing appears to happen. You can see this on the ECG in the flat baseline between the end of the T wave and the beginning of the P wave. Ions continue to move in and out of the cell, but their net movement typically results in no net current. Positive ions moving IN equal positive ions moving OUT. This is the time when the Na+ ions are returned to the OUTSIDE of the cell and the K+ ions return to the INSIDE of the cell. Whenever there are MORE positive ions moving in one direction, we say there is a current traveling in that direction. For instance, during depolarization when all the Na+ ion channels open and Na+ pours into the cell, there is an inward current. Later, during electrical diastole, when 2 K+ ions are exchanged for 3 Na+ ions, there is obviously more positive charges leaving the cell than entering it. Thus, following the direction of the flow of positive ions, we would now say that there is an outward current. Inward currents are always depolarizing currents and outward currents are always repolarizing currents. The currents can be caused by the flow of Na+ ions, Ca++ ions or K+ ions. 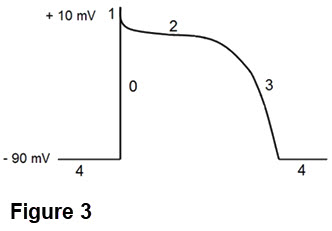 Look at how much longer repolarization lasts when compared with depolarization! That vertical straight line labeled “0” represents depolarization – all of it! The entire QRS complex is represented by that one, straight, vertical line. And not just the R wave – it includes any Q waves, S waves or R′ waves. The lines representing phases 1, 2 and 3 represent repolarization. Phase 2 represents the ST segment on the ECG and Phase 3 represents the T wave (there are reasons it doesn’t look like a T wave – don’t worry about it!). Some people think that the action potential looks like a really bad STEMI. I agree that it does, somewhat, but that is purely coincidental – there is no connection. Phase 1 is that point at which the Na+ channels close and the cell begins to extrude K+. If the cell repolarizes a bit more than usual, the ECG tracing will manifest what is known as early repolarization. Phase 4 is electrical diastole, that period of time between the end of the T wave and the beginning of the P wave.

During Phase 0 (depolarization), Na+ ions rush into the cell, depolarizing the interior of the cell until it is slightly positive (~ 10 mV). But, unfortunately, those ions can’t rush back out. The door has slammed shut behind them. Although they were initially able to enter the cell by flowing down their concentration gradient (remember Figure 1?), they now must be pumped out. But that is going to take a while. In the meantime, something must be done much sooner to prevent the cell from becoming too  positively charged. What can be done? How about if we offset the positive ions that flowed INTO the cell (Na+) with positive ions of the same charge (+1) flowing OUT of the cell? And, there just happens to be a huge amount of another ion with a charge of +1 located in the cell that CAN flow out through its own channels with no problem – potassium (K+). So, K+ immediately begins to exit from the cell to offset the excess positive charge caused by all the Na+ ions that just entered. Shouldn’t that egress of K+ ions look more like a straight, downward slanting line on the action potential rather than the plateau followed by a curved line that we see, representing phases 2 and 3? Yes, it should. But around this time Ca++ starts flooding into the cell to initiate the contraction process of the myofibrils in the myocyte. Those incoming positive ions (each Ca ion has TWO positive charges) momentarily counterbalance the exit of positive ions caused by the K+ moving out of the cell through its own channels. But the Ca++ influx is short-lived. You can see on the action potential the point at which Ca++ stops entering the cell (Figure 4 – red arrow with bracket) and the 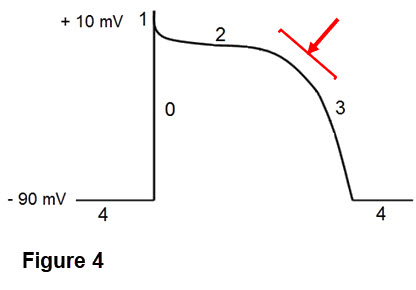 K+ ions continue their exit out of the cell. At this point, there is still too much Na+ inside the cell (remember: it still hasn’t been removed!) and too much K+ outside the cell. They need to change places before there can be another normal depolarization. While K+ can move relatively freely back and forth across the cell membrane, Na+ cannot. There is an enzyme referred to as the Na+/K+ pump that facilitates the exchange of 3 Na+ for 2 K+ ions. Although the Na+/K+ pump is just ONE of the mechanisms used to pump Na+ out of the cell, it IS the main route of exchange.

Here is a seeming paradox that you may have noticed in my discussion. When discussing electrical systole – the flat baseline between the end of the T wave and the beginning of the P wave, I said that much of the exchange between Na+ and K+ via the Na+/K+ pump occurred during that time. I also mentioned that since 3 Na+ were exchanged for only 2 K+, that an outward, repolarizing Na+ current had developed. Why, then, is the baseline flat and not reflecting this outward current? First, if the Na+/K+ pump were allowed to continue without interference, the cell would eventually repolarize itself down to levels that would make it impossible to depolarize. There are other K+ channels that will prevent that from happening. Also, remember that huge influx of Ca++ ions that entered the cell during Phase 2, causing the momentary “plateau?” Well, just like Na+, Ca++ can’t just flow right back out the way it came in, either; it must be pumped out (just like Na+). And guess which ion it typically exchanges for? Sodium!

So, as you can see… just because the baseline is flat during electrical diastole, there is still a lot happening! It’s just that the balance of ions being exchanged stays pretty close to zero.

I attended Tulane University as an undergraduate student and spent four years in New Orleans. When you move there, you are immediately introduced to a concept called lagniappe (pronounced ‘lan-yap”). A lagniappe is a Creole term for a little something extra – a freebie meant as an offering of generosity and kindness. So I have a few lagniappes for you that don’t necessarily have anything to do with the topic of action potentials…