Using It to Decipher Complex ECGs 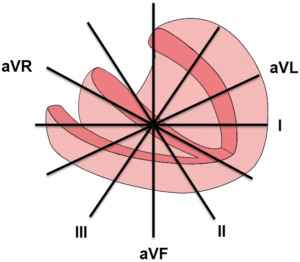 This diagram incorporates all six of the limb Leads for the purpose of understanding the vectors associated with every deflection and every segment on the ECG.

Here’s a concept to bear in mind that is rarely mentioned: all the limb leads depicted here are situated – theoretically – at almost an infinite distance from the surface of the heart because any electrode more than 18 inches from the heart is essentially the same as an electrode 15 or 20 feet from the heart. That is to say, the differences recorded beyond 18 inches are very, very negligible. Thus, it is as though the electrodes are far enough away that they are seeing a “composite” or “average” or “mean” value for all the electrical currents generated by the heart. Now, when you determine the “mean QRS axis” in the frontal plane (limb leads), you are actually determining only the direction of the “mean vector” of the QRS. Your calculations do not create a “mean” value; that value has already been determined by the ECG machine. If you see that the QRS in Lead aVL is almost isoelectric (or equiphasic), then the mean direction of the QRS vector will be found in the lead perpendicular to aVL and that would be Lead II. The positive pole for Lead II is located at +60° so the mean QRS vector is directed at +60°. None of your calculations created a “mean” value because you were already using mean values! You simply determined the direction of the mean QRS interval.

Back to the Hexaxial Reference Grid… Each lead is separated by 30°. The positive pole of Lead I is the starting point and is located at 0°. In the beginning (and you can still find references to this in the older literature), the grid was measured in one degree increments from 0° to 359°. This simply was not practical. Quick… where is 237° located? See what I mean?

So, the decision was made to divide the grid into two sections – one section above the horizontal Lead I and the other section below Lead I. Each would have 180° and both sections would share the 0° start and the 180° finish. This would make practical calculations “on the fly” much simpler. But a new problem was created: now we have two 30°, two 60°, two 75° and so on. You get the picture. The question now was how to distinguish between the degrees above Lead I and the degrees below Lead I. They could have used “A” and “B” (30°A and 30°B) or “α” and “β” (30°α and 30°β). But no… they decided to use “+” and “-“ (+30° and -30°). They did not foresee the confusion and headaches this designation would cause!

“+” and “-“, as used in this case, have no mathematical or algebraic significance. It is simply a designation to distinguish a value below Lead I from the same value above Lead I. In math, if you add +30 and -30, the answer is 0. On the Hexaxial Reference Grid, if we add +30° and -30°, the answer is 60° because we have added the 30° below Lead I to the 30° above Lead I. The positive and negative signs have no mathematical or algebraic value!

Did you notice that I said that every deflection on the ECG tracing is a vector – including segments? Yes, even the ST segment is a vector. In fact, any deviation – up or down – from a flat baseline is the representation of a vector.

Now, here is where your knowledge of the Hexaxial Reference Grid really helps you look like a genius! Let’s say that the acute epicardial ischemia of the basolateral area we mentioned above is due to a proximal occlusion of a Type 3 (“wrap-around”) left anterior descending artery (LAD). Such an occlusion can result in not only an infarction of the anterior wall of the left ventricle (LV) including anteroseptal and anterolateral walls, but also an acute epicardial ischemia of part of the inferior wall of the LV as well. So now we have an acute epicardial ischemia in the inferior wall as well as the basolateral (upper left) wall. There are, of course, now four injury vectors – one pointing toward Lead aVL in the basolateral area and three other injury currents pointing toward the inferior wall (Leads II, III and aVF).

What if the basolateral ischemia were a bit higher up than the positive pole of Lead aVL? In that case, there would be more opposition between the injury vector of the basolateral wall and the injury vectors of the inferior wall. This could result in minimal or no ST elevation in any of those leads! In other words, there could be a large MI present that would be presenting with extremely subtle findings. “That’s awful!” you exclaim. “Thank goodness Type 3 LADs are rare!” You think they are rare? Seventy-five to eighty per cent of LADs are Type 3! They are the most common type of LAD by far!

You would not be able to suspect nor decipher what is happening in this case without a thorough knowledge of the Hexaxial Reference Grid. I do not look at any ECG without invoking its image at some point. And that is a fact!