All About Junctional Beats

All throughout the bundle of His and the Purkinje fibers are cells (or collections of cells) that have the capability of spontaneous depolarization. Remember that most myocytes depend on an arriving impulse to depolarize them and stimulate them to fire and then pass along the depolarization wave. But some cells outside the SA node are capable of spontaneously depolarizing and thus initiate their own impulse that can spread through the heart (just like the sinus node). In the ventricles, these cells are located in the conducting tissue of the bundle of His and the Purkinje fibers. We call them accessory (or subsidiary) pacemakers. They are able to assume control should the sinus node fail.

The diagram on the left represents the bundle of His. 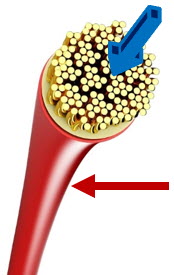 nctional beats are somewhat eccentric (red arrow in diagram). Even if the impulse were to arise from a cell that is exactly in the middle of the bundle of His, that is still not quite the same as entering the His bundle “from the top” (blue 3-D arrow).  In the first case, the fibers are excited outward in all directions  from the middle and not all are excited at exactly the same time or with the same strength. When the fibers are excited “from the top,” as by a sinus-conducted impulse (blue 3-D arrow), they are all stimulated simultaneously and with the same strength. Already we have the rationale for a slightly different QRS complex. Granted, the difference in the QRS may be so slight that not even a very experienced electrocardiographer would be able to detect it – but something else on the ECG will most likely be able to detect it and “tell” you about it – if you will only “listen!” More on this later…

If an ectopic junctional  impulse enters the bundle of His from the left side after the fibers have already arranged themselves for the division into left and right bundle branches, it is quite possible that the fibers destined for the left bundle may be the only ones that receive any significant stimulus and could, theoretically, result in a QRS with right bundle branch block morphology.

As I said previously, even when the sinus and junctional QRS complexes look exactly the same, the ECG may still alert  you regarding which is sinus and which is junctional (ectopic). How does it do that? Look closely at the T waves. Look at the morphology of the T waves in all those beats that you know to be sinus-conducted and then compare them to the T wave of the possible junctional beat. Even when the QRS complexes look exactly the same, the T waves will often show some dissimilarity. Note the difference (blue arrow) in the rhythm strip on the top. In the bottom rhythm strip, the junctional QRS is identical to the sinus-conducted QRS complexes, but notice the difference in the T waves: the junctional T wave is much more peaked and rejoins the baseline with much less slurring.

How close should the P´ wave (we use the designation P´ to indicate any P wave that did not originate in the sinus node) be to the QRS in a junctional beat?

What determines whether the P´ wave appears before, during or after the QRS as well as how far in front of or how far after the QRS is the DIFFERENCE in conduction time from the site of the ectopic junctional pacemaker to the atria and to the ventricles.

There is no rule regarding the duration of the P´R interval of a junctional beat, but in my experience, it has always been less than 0.12 seconds and usually 0.08 seconds or less. The RP´ interval is usually about the same duration though, again, there is no fixed value for the duration.

If someone asked you to show them the junctional beat in the illustration to the left, what would your response be? Would you indicate the large QRS complex or would you respond, “I can’t do that.” If you haven’t already surmised, “I can’t do that” is the correct answer. The actual firing of the junctional ectopic pacemaker is not visible on the ECG for the same reason the firing of the SA node is not visible. 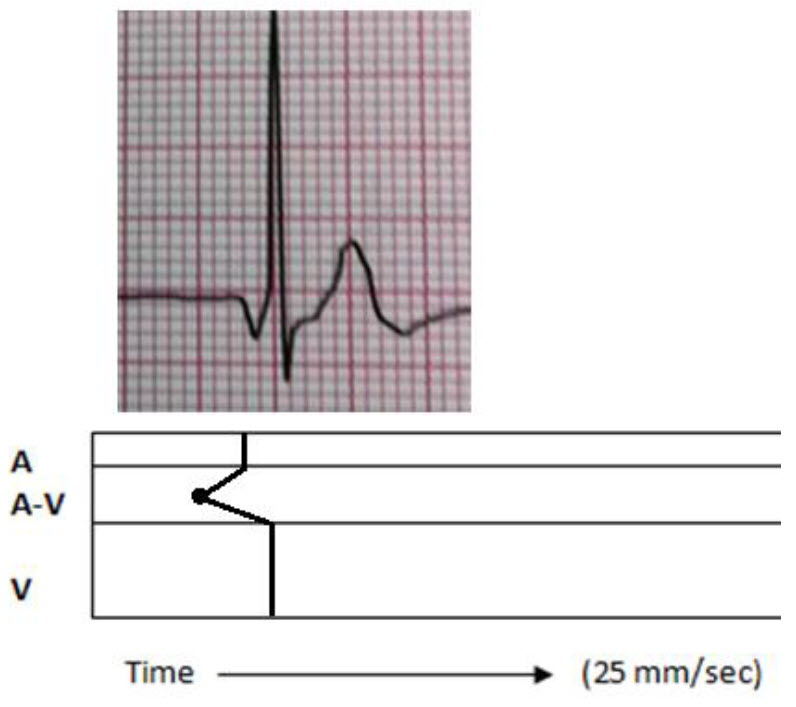 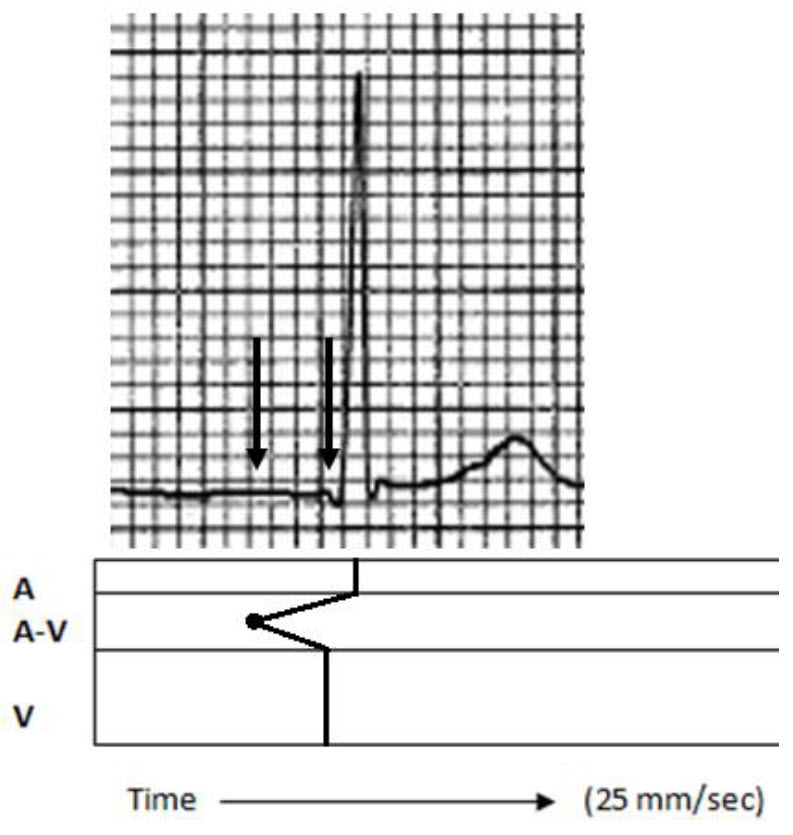 In the second laddergram of a junctional beat, we see that the ventricle is activated first, but the retrograde atrial impulse follows it so closely that it is buried in the QRS complex and thus not visible on the ECG tracing.

The first arrow in the tracing to the left indicates the presumed location of the firing of the junctional ectopic pacemaker. How did we know where to put the arrow? Very simple: we guessed! When we want to laddergram the depolarization of a pacemaker that does not appear normally on the ECG, we arbitrarily place it 0.08 msec or 0.12 msec (the choice is yours) in front of the first deflection created by the pacemaker discharge. That would be 2 or 3 small squares, respectively. It really doesn’t matter exactly where the pacemaker fired. This approach will work just fine as long as we keep using the same distance (or duration).

Now, let’s clear up a bit of confusion regarding the orientation of the P´ waves. The P´ waves will be traveling upward through the AV node. This will result in inverted P´ waves in the inferior leads and upright P´ waves in the superior leads. Leads II, III and aVF are the inferior leads that will have inverted P´ waves and Leads aVR and aVL are the superior leads that will have upright P´ waves. Lead I runs perpendicular to the direction of propagation of the P´ waves so you generally don’t see them very well in Lead I; if you see them at all they will be minimally upright (but again, they are generally very difficult to see in Lead I). V1 and usually V2 – V4 will have upright P´ waves, but Leads V5 and V6 can be variable – sometimes upright and sometimes inverted. Why is that? Remember that the electrodes for Leads V5 and V6 are very often placed lower than they should be on the chest wall. In such cases Leads V5 and V6 are able to see not only left-right forces but also superior-inferior forces (just like the inferior leads). If the electrodes for V5 and V6 have been placed too low, they may demonstrate inverted P´ waves; if they are placed correctly, they will likely show upright P´ waves.

If you would like to learn more about interpreting ECGs at an advanced level, come join us in one of our presentations of the Advanced ECG Interpretation Boot Camp. Go to our home page to see what we have to offer! At Medicus of Houston, you are always a participant…  never just an audience!