This ECG was chosen randomly from my ECG collection.

Here is the infamous “Normal sinus rhythm; Normal ECG” that we see so frequently. Today, we are going to concentrate on looking at T waves with a more discerning and critical eye.

You are just as apt to miss a significant finding when the machine interpretation says “Normal sinus rhythm; Normal ECG” as when it says “Acute MI” or “Ventricular Tachycardia” if you don’t take the time to inspect the ECG yourself. 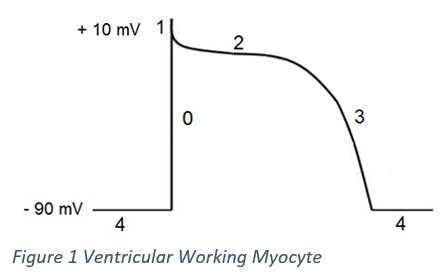 Look at how much longer repolarization lasts when compared with depolarization! That vertical straight line labeled “0” represents depolarization – all of it! The entire QRS complex is represented by that one, straight, vertical line. And not just the R wave – it includes any Q waves, S waves or R′ waves. The lines representing phases 1, 2 and 3 represent repolarization. Phase 2 represents the ST segment on the ECG and Phase 3 represents the T wave (there are reasons it doesn’t look like a T wave – don’t worry about it!). Some people think that the action potential looks like a really bad STEMI. I agree that it does, somewhat, but that is purely coincidental – there is no connection.

What Happens During the Action Potential?

During Phase 0 (depolarization), Na+ ions rush into the cell, making the interior of the cell slightly positive (~ 10 mV). But, unfortunately, those ions can’t rush back out. The door has slammed shut behind them. Although they were initially able to enter the cell by flowing down their concentration gradient, they now have to be pumped out. But that is going to take a while. In the meantime, the cell must be prevented from becoming highly positively charged. How can this be done? How about if we balance the positive ions that flowed INTO the cell (Na+) with positive ions of the same charge (+1) flowing OUT of the cell? And, there just happens to be a huge amount of another ion with a charge of +1 located in the cell that CAN flow out through its own channels with no problem – potassium (K+)! So, K+ immediately begins to exit from the cell to offset the excess positive charge caused by the Na+ influx. Shouldn’t that loss of K+ look more like a straight, downward slanting line rather than the curved line that we see, representing phases 2 and 3? Yes, it should. But around this time Ca++ starts flooding into the cell to initiate the contraction process of the myofibrils in the myocyte. Those incoming positive ions (Ca++ has TWO positive charges) momentarily counterbalance the exit of positive ions 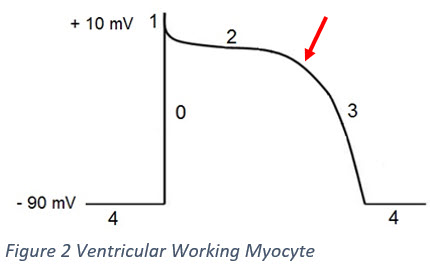 caused by the K+ moving out of the cell through its own channels. But the Ca++ influx is short-lived. You can see on the action potential the point at which Ca++ stops entering the cell (red arrow) and the K+ ions continue their exit out of the cell. At this point, there is still too much Na+ inside the cell (remember: it still hasn’t been removed) and too much K+ outside the cell. They need to change places before there can be another normal depolarization. While K+ can move relatively freely back and forth across the cell membrane, Na+ cannot. There is an enzyme referred to as the Na+/K+ pump that facilitates the exchange of 3 Na+ for 2 K+ ions. The Na+/K+ pump is just one of the mechanisms used to pump Na+ out of the cell, but it is the main route of exchange.

How does the T wave fit into all this?

The T wave represents the rapid phase of repolarization – the part AFTER Ca++ has stopped flowing into the cell and represents a rapid egress of K+ from the cell. So whenever you look at a T wave, you are seeing that last spurt of K+ leaving the cell in order to keep the cell from being overwhelmed with positive charges. To reinforce this concept, recall that the ECG manifestation of hypocalcemia is a prolonged ST segment with a NORMAL T wave at the end. Now do you see why the T wave remains normal while the ST segment is prolonged? It’s because Ca++ has no effect on the T wave – only K+ has an effect. Just think of what happens to the T wave during hypokalemia and hyperkalemia.

Now let’s look at the T waves in the “Normal ECG.” (I’ve reproduced the ECG for you for easy reference.)

Look closely. Bear in mind that this ECG was recorded in an emergency room on a 62 y/o male – we’ll assume (for teaching purposes) that he presents with classic chest pain.

I don’t think that many of these T waves have the normal morphology that I mentioned earlier. Here is an enlargement:

Do you see the abnormality that I am referring to? For your reference, here is an enlargement of what I consider to be very NORMAL T waves:

Do you see the difference now? Look at the symmetry of the T waves. The T waves in the original ECG (above) appear very SYMMETRICAL. Now look at the T waves in the snippet on the left – do you see how ASYMMETRICAL they are? Symmetrical T waves are very suggestive of ischemic heart disease. If you have a patient who has symmetrical T waves should you send them directly to the ER? Well, only if they are having chest pain, in which case you would send them to the ER even without symmetrical T waves. This is usually a sign of chronic, underlying ischemic heart disease. Women with normal hearts may occasionally manifest symmetrical T waves. In my experience, it has been mostly young women in their late teens through early thirties.

I hope you learned something from this short introduction to action potentials and T waves. If you would like to learn more, take a moment to browse the other posts on this website blog and check out the classes I offer. All classes are presented live! and include YOUR active participation in the interpretation of complex ECGs with my guidance and support.

Come join us and be a PARTICIPANT… not just an audience!